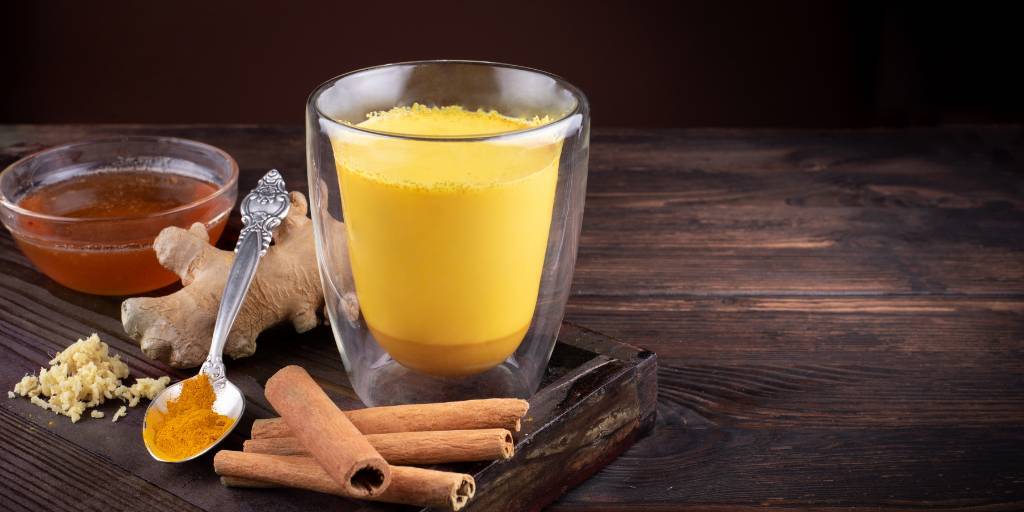 This healthy yellow beverage is made by warming up milk with turmeric and other spices, such as cinnamon and ginger.

So what’s all the hype about golden milk?

Golden milk (also known as turmeric milk) is a powerful and deliciously warm, soothing drink that helps to heal your body while you are sleeping. Golden milk has been around for centuries and is known as an anti-inflammatory, antioxidant, anti-bacterial, and anti-viral.

In this article, I will explain to you the 5 science-based benefits of drinking golden milk for men every day, and a simple recipe to make your own.

It Has Lots of Antioxidants

Golden milk is a popular drink in Ayurvedic medicine. The key ingredient in this drink is turmeric which gives curry its yellow color. Curcumin, the active component in turmeric, has been used as a traditional remedy for its anti-inflammatory and antioxidant properties.

Antioxidants are compounds that fight cell damage, protecting your body from oxidative stress. They’re essential to the functioning of your cells, and studies regularly show that diets rich in antioxidants can help protect against premature aging and chronic diseases like heart disease.

And because most traditional golden milk recipes also include ginger and cinnamon, both of which are loaded with antioxidants, you know why this drink is considered to be a healing tonic that can be taken daily, but it can also be used as an anti-inflammatory and detoxifying agent when needed.

Has Antibacterial, Antiviral, and Antifungal Properties

If you’re looking for ways to stay healthy and avoid getting sick this winter, try incorporating golden milk into your diet. Golden milk is a traditional Ayurvedic drink that is made of turmeric, ginger, and other seasonings.

The ingredients in golden milk also have strong antioxidant and anti-inflammatory properties which may strengthen your immune system.

However, to get the most benefits of golden milk, you have to heat it up, because you can get up to 10 times the best absorption of all ingredients if you didn’t.

May Inflammation and Joint Pain

The health benefits of ginger, cinnamon, and curcumin are well documented. They have potent anti-inflammatory properties and can help with pain management.

The black pepper is used because it helps your body absorb the turmeric, and also all the benefits of curcumin in this ingredient. So, don’t forget black pepper when making golden milk.

There seems to be a link between taking turmeric and the reduction of symptoms of depression. Curcumin, which is the spice’s active compound, has been found to have anti-inflammatory, antioxidant, and neuroprotective properties that may help to combat depression.

As I already mentioned, the active compound curcumin appears to be the likely reason, but more studies are needed.

It Will Make Your Bones Stronger

Golden milk is a drink made from turmeric and milk, with some people also using ginger, raw honey, and coconut oil. This drink can provide you with calcium and vitamin D, which are important for your health. These nutrients can strengthen your bones, which can reduce the risk of diseases such as osteopenia and osteoporosis.

So, now you know some of the main health benefits of drinking golden milk at bedtime. If you want to drink golden milk, then you will need to prepare it with these ingredients:

The recipe is simple: mix all ingredients in a small saucepan and whisk to combine, then heat over medium heat. Heat until the mixture is hot to the touch but not boiling – about 4 minutes – and whisk frequently.

Although making this recipe in advance is not required, you can also store it in the fridge for up to 3 days.

Please reheat the milk before drinking.